Universal Genève was born on the 18th of January 1894, founded by Numa Descombes (1863-1897) and Ulysse Perret (1868-1933). Originally registered in Rue de College in LeLocle, Switzerland under the name “Universal Watch” (Registration N°6731), it would take a few years for the company to be named as we know it today. The legal business purpose of the company was to produce ‘cases, cuvettes, dials, movements, instruments and packaging for watches.’ Later that year, the entrepreneurs deposited their first patent: N°8014 - a 24 hour jumping hour movement.

In 1897 Numa Descombes suddenly passed away. On the 22nd July 1897 Louis Berthoud joined Ulysse Perret as a partner in the company. A new company was formed: “Perret et Berthoud” (Registration N°9420) which inherited all sub-brands and patents of “Universal Watch.”

As the modern world started to take shape, the two partners realized the potential of wristwatches; on the 2nd September 1898 they registered (N°10407) the “Universal Watch Extra” brand: a 30 minute cronograph with 6 o’clock pusher. However, it wasn’t till 1917 that they presented the first wristwatch chronograph with a coaxial pusher: a 17‴ brass movement with enameled dial.

In April 1918, the company decided to open a shop in Geneva and in 1919 the administrative offices were moved to the french-speaking capital, in Rue de l’Arabesque, to better manage the international relationships the brand was developing and the company was renamed to “Perret & Berthoud SA”. 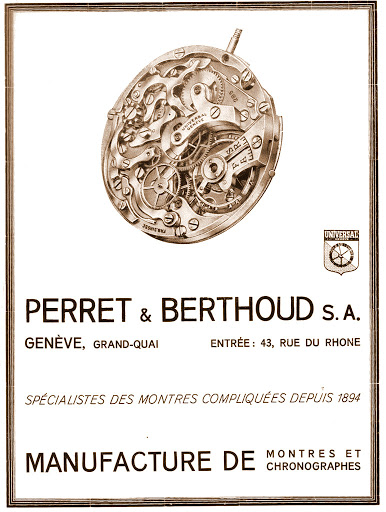 Advert for the new chronograph 285 calibre

In the 1920s the brand went through a prolific research & development period, out of which came (1925) the Auto-Rem automatic movement (N°91051)  and the ‘Cabriolet’ model (1927) considered the first reversible watch with an 8-day reserve. In 1929 the ‘Marine Knot’ logo was registered (N°70456) following a Swiss law that required companies to adopt a logo. 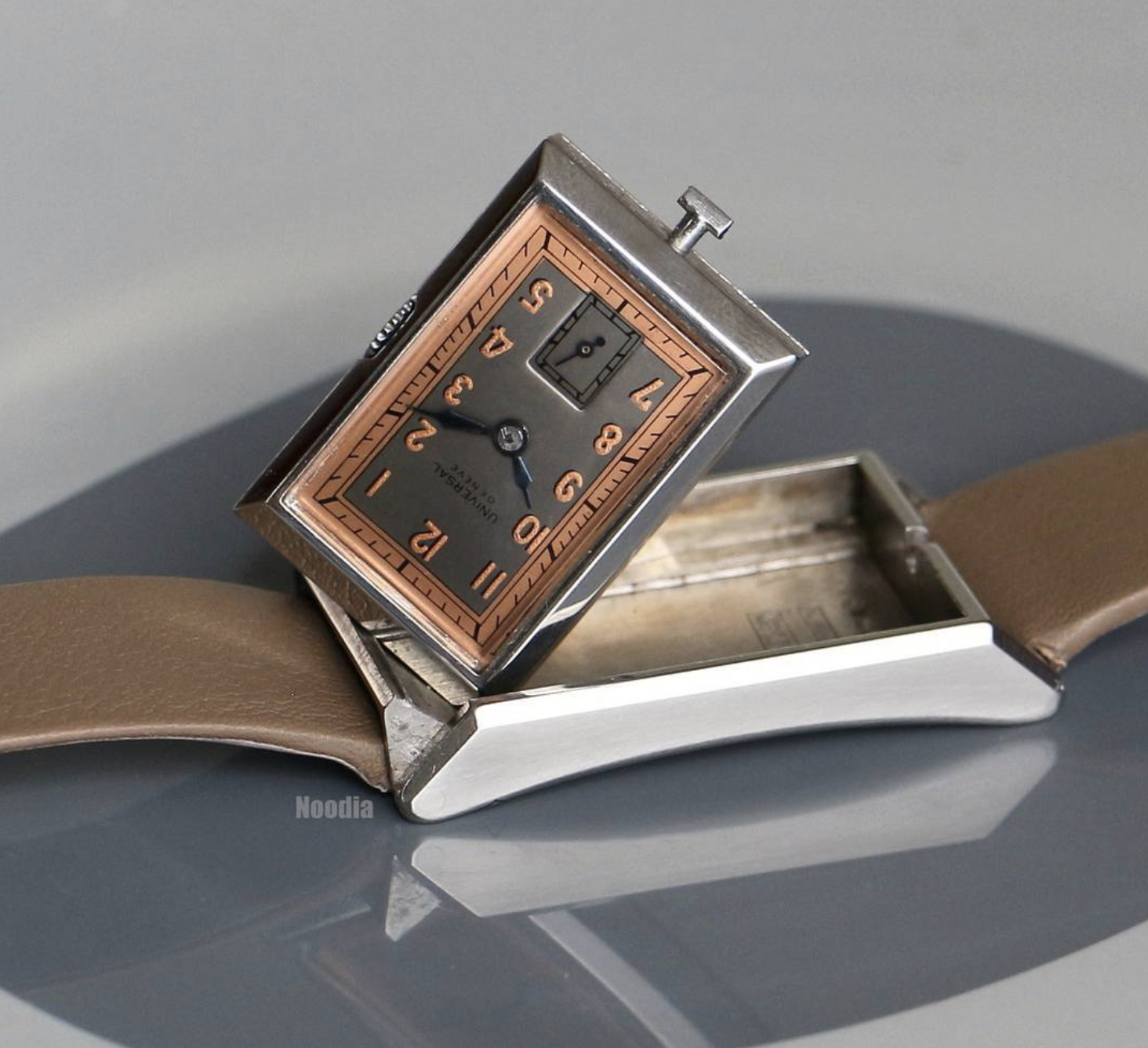 In 1933, after the death of Mr. Perret, his son Raoul joined the company and, given the global financial crisis, decided to regroup the company's activities in Geneva to increase efficiency, rebranding to “Universal Watch Co. Ltd. Genève” and additionally bringing in a team of investors that would ultimately allow the company to expand on a global scale.

For their first BaselWorld exhibition in 1934, the brand presented the first ever two pusher chronograph with the ingenious double column-wheel system: the first generation ‘Compur’ model. In addition the company registered the following brands: “Universal Watch Supra”, “Unversteel” and “Universal Watch Compur”. 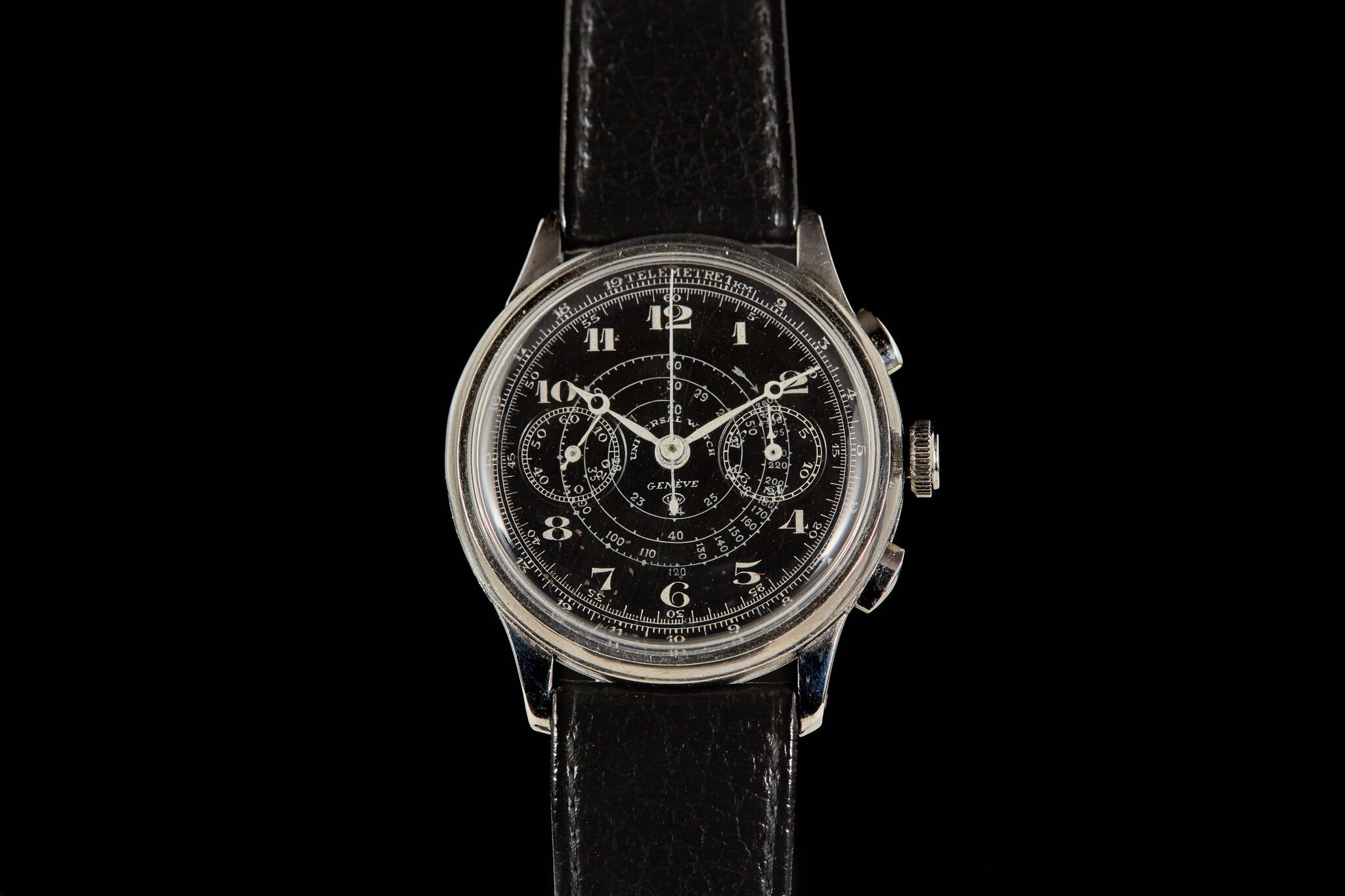 In 1935 the company moved their headquarters to the prestigious Rue du Rhône 43, between the Rolex and Patek Philippe buildings, an important statement for Universal - consolidating the brand as one of the top Swiss watch producers. More brand names would be registered such as “Universal Watch U.W.” which included the logo we will see stamped on the caseback till 1937, “Universal Watch Contax” and “UWECO” (which stood for Universal Watch Et COmpany). 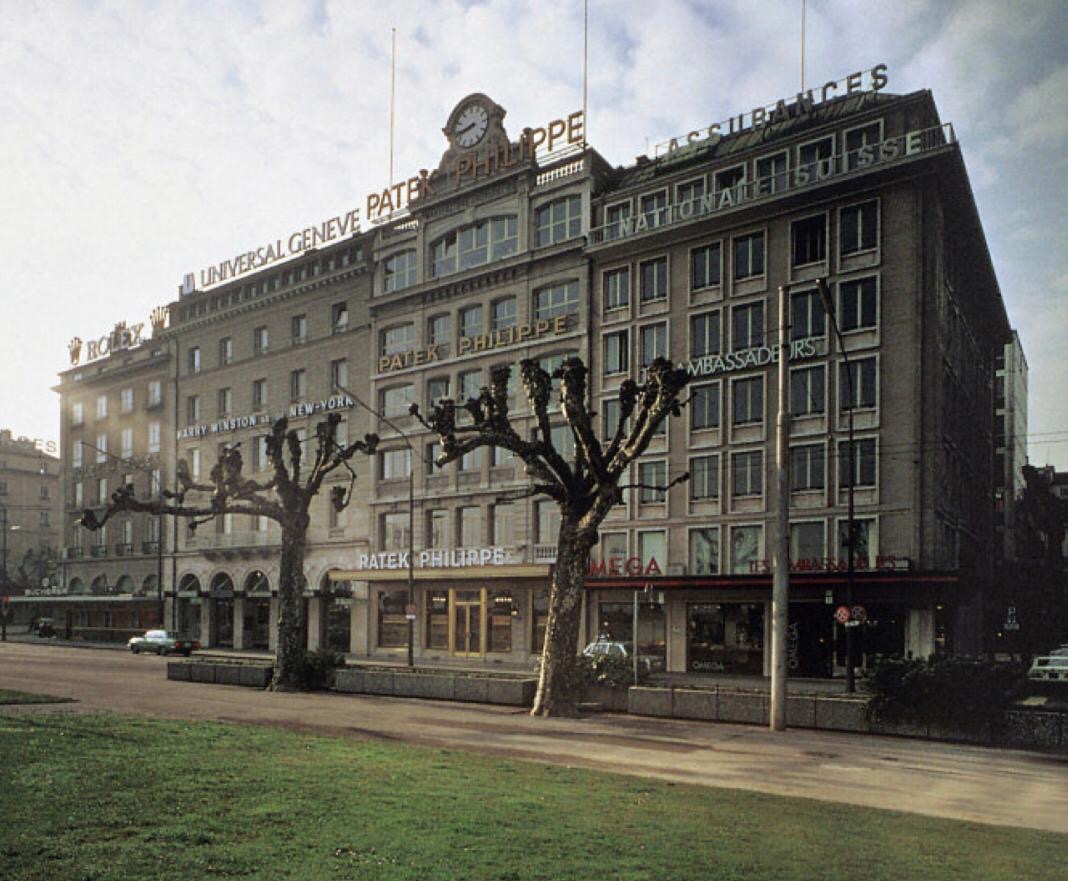 In 1936 the brand introduced 2 new models: the ‘Uni-Compax’ - a two register, 45 minute counter chronograph which would eventually take over the Compur model - and the ‘Compax’ model, a 3 counter chronograph that was the first ever wristwatch with an hour counter. 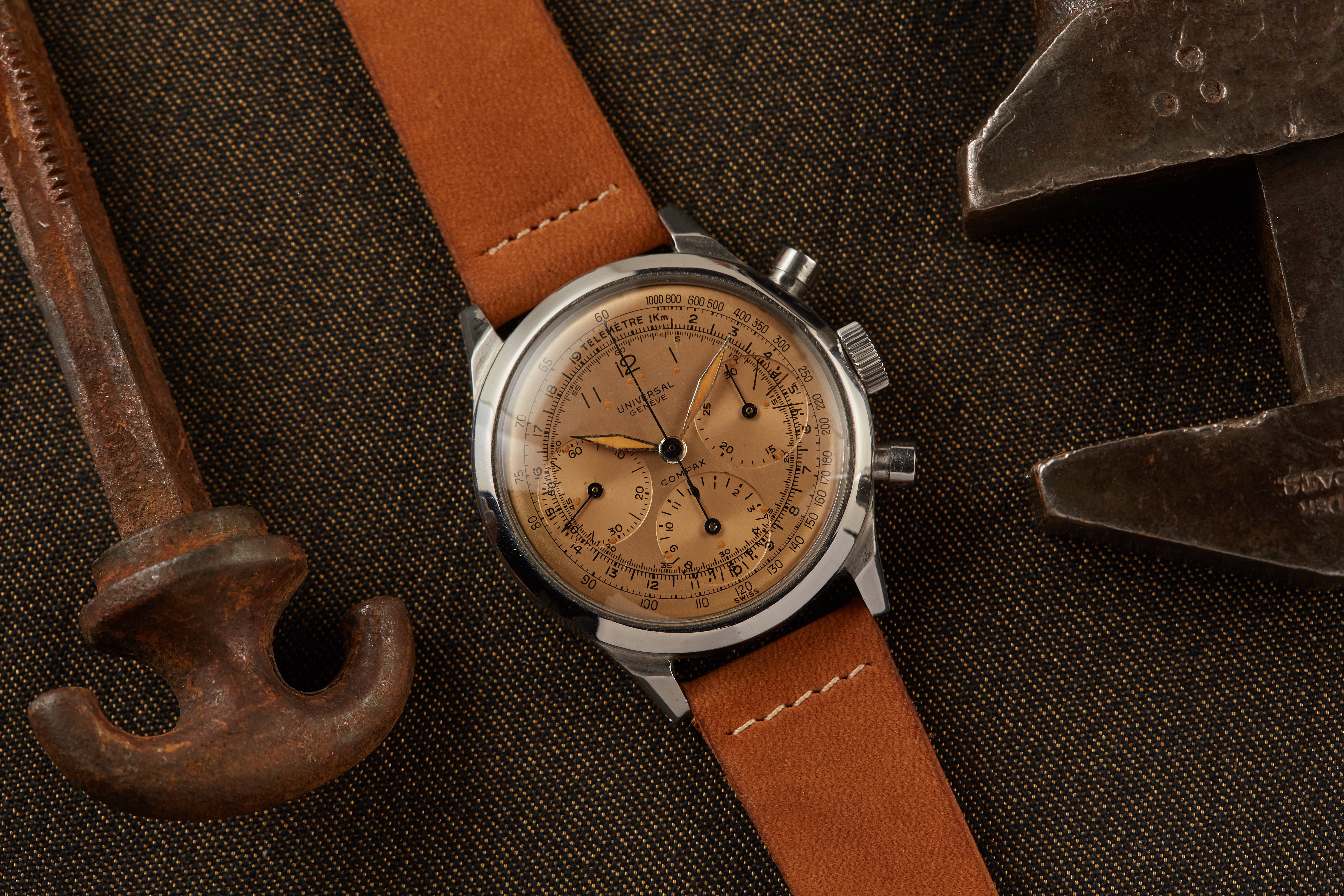 In 1937 the company was finally named ‘Universal Genève’ and a new, shielded logo (N°91636) was introduced. This new logo will be stamped on the inner caseback till 1953. The same year, the calibre 289 debuted as the smallest serially produced (10.5‴ line) calibre aimed at a female clientele.

In the late 1940s Universal Genève introduced the ‘Aero-Compax’ model (N°239879) - a 4 counter chronograph with a memo counter at 12 o’clock. On the 31st January 1941 a new factory in Les Ponts-de-Martel was inaugurated, the most advanced factory of its kind. The exact relationship between this new factory and Martel Company is still unclear, though Martel did produce ébauches for both Universal Genève and Zenith. During this period Universal produced some chronographs for the military forces too: in particular for the German RLM and Italian Air Force. 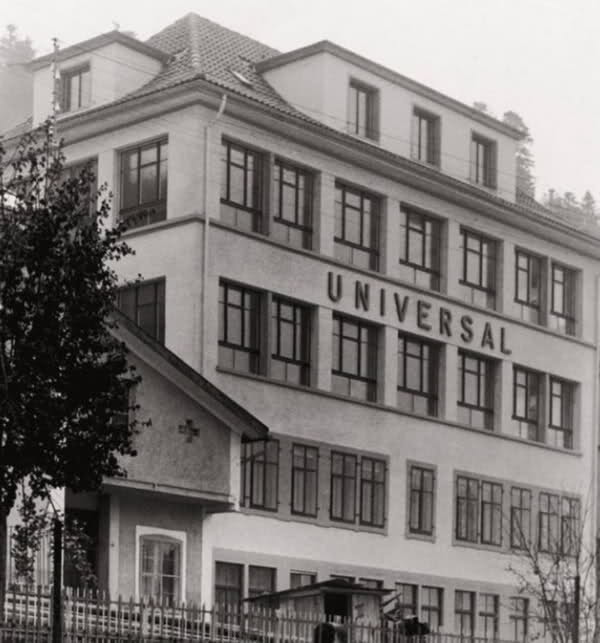 The new factory in Les-Ponts-de-Martel

In 1942 Renè Perret (Raoul’s brother) entered the family business, and would play a fundamental role in the further worldwide expansion of the brand. Around the same period the ‘Henri Stern Watch Agency’ in New York, Patek Philippe’s official importer would sign to have the exclusive rights for Universal Genève in the USA. Through extensive marketing and strategic branding, this move would prove fundamental in Universal’s success in the States.

A UG advert by the H.S. Agency

In 1943, on the 21st of August, Universal Genève introduced an annual calendar model in 2 variants, with and without moon phases. In 1944, to celebrate 50 years of active production, Universal unveiled the ‘Tri-Compax’ model at the Baselworld show; a triple calendar chronograph with moonphase, which would soon become their best-selling watch, so much so that a Tri-Compax was given to US President Harry Truman at the Potsdam conference. 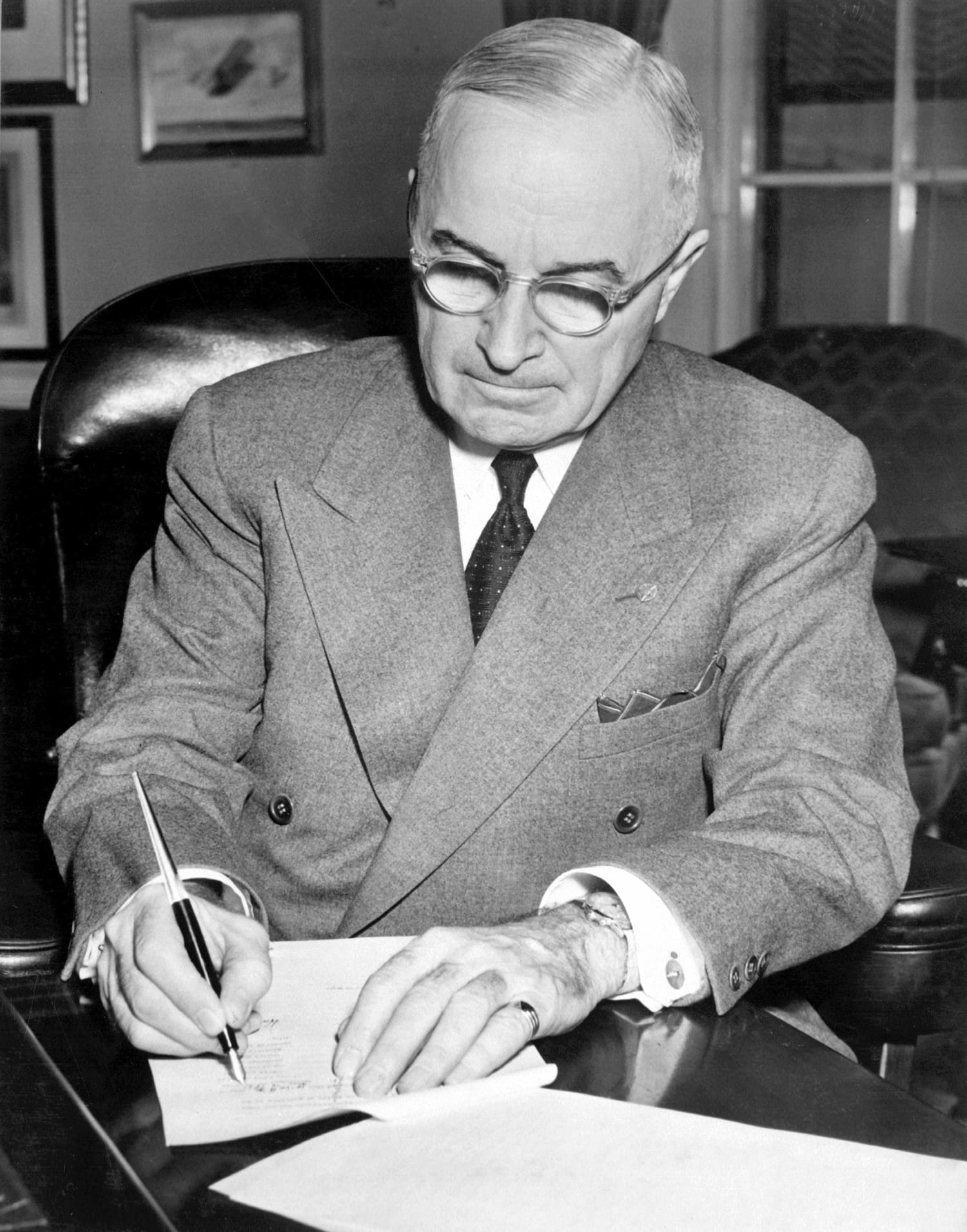 US president H. Truman wearing his UG Tri-Compax at the Potsdam conference

In the following year, 1945, Universal released the ‘Medico-Compax’ model featuring a pulsometric scale and the ‘Dato-compax’, a 4 register chronograph with a date counter at 12 o’clock. At this point, all the models offered by the brand are equipped with in-house calibres. Later in 1953 a waterproof version of the Tricompax would be introduced. This success would lead the company to open yet another factory: “Manifacture des Montres Universal – Perret Frères SA” in Carouge, Geneva.

In 1948 the automatic bumper calibre 138SS was introduced. Throughout the early 1950s multiple brevets were issued for a bidirectional movement. Finally in 1954 the ‘Polarouter’ was launched and subsequently changed to ‘Polerouter’. The watch was supplied to crew members of the Scandinavian Airline System (SAS) as the official timepiece for their newly introduced transatlantic flights. The model was designed by the 22-year old Gerald Genta, who would later revolutionize the design of modern watchmaking. 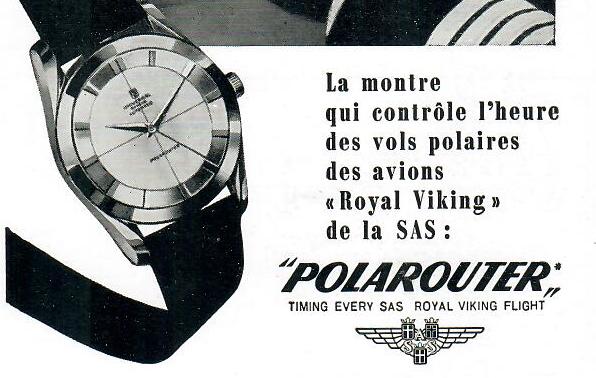 An Polarouter Advert in partnership with the SAS

On the 27th May 1955, with Patent N°329805 Universal introduced the Microtor calibre 215 developed with the Buren Watch Company (but attributed to Universal after a legal dispute). This calibre would serve as the basis of a new line of time-only models based on the polerouter such as the 2 crown Polerouter Sub, Jet & Genève. 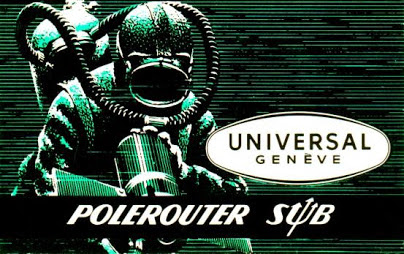 1962 marked the beginning of quartz experimentation for Universal Genève, filing brevet N°385745 in collaboration with Movado, leading to the 1963 BaselWorld release of the Polerouter Electric. At the same time, significant advancements on the microtor movement were being made to finally reach the calibre 69 that would be used on a new series of more contemporary looking models such as Polerouter Super and a Sub with rotating bezel.

Following the purchase of the Martel establishment by Zenith, around 1963, the first line of Valjoux-equipped Universal’s was introduced. The ‘Compax’ model with a Valjoux 72 (UG cal. 85) was being worn by Nina Rindt and the last version of the ‘Tri-Compax’ was rocking on Eric Clapton’s wrist. The ‘Uni-Compax’ would become the Big-eye, and towards the end of the decade the Space-Compax would make its appearance in the brand offering, whilst the Aero-compax would lose a counter and feature a 24 hour dial. 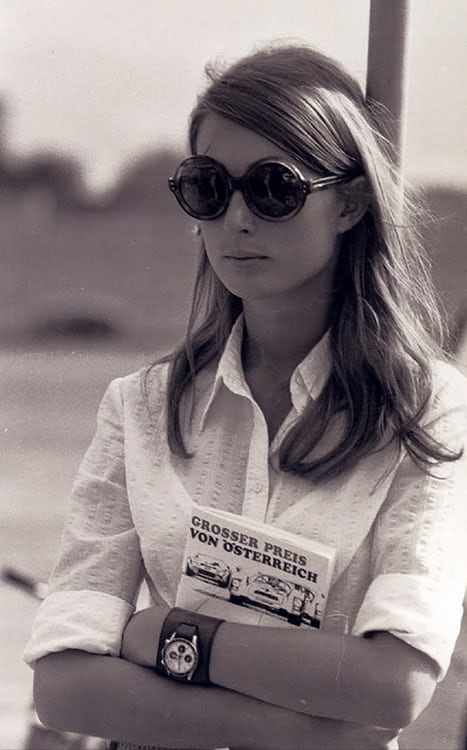 Nina Rindt wearing her UG ‘Compax’ at a race-track

Following the success of the microtor, Universal Genève decided to push the boundaries of automatic movements launching the Gerald Genta designed ‘Golden Shadow’, the world’s thinnest automatic watch, equipped with the 2.5mm thick calibre 66. A few years later in 1968, the Unisonic model was released, equipped with a diapason movement made in collaboration with Bulova. Further experimentation with quartz came about in the next few years, however these were times of dire change in Swiss watch industry. 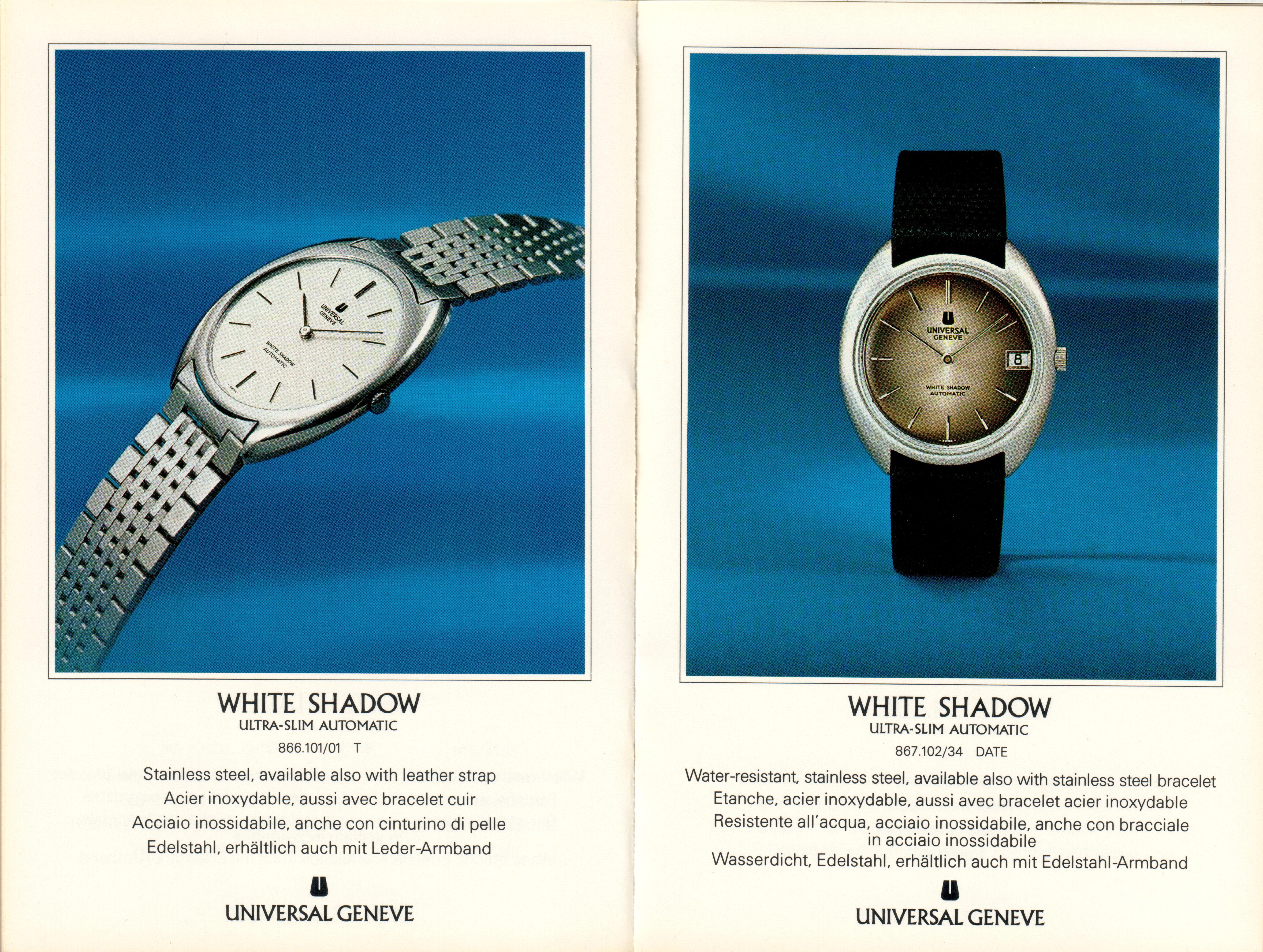 A White Shadow advert, the steel version of the Golden Shadow

As the quartz-mania hit mainstream in the 1970s, the whole Swiss watch industry suffered a massive collapse under the inability to produce cheaper alternatives to the mostly Japanese models that flooded the market. Universal Genève was not exempt from this crisis and was on the brink of bankruptcy. The brand was ultimately bought by the Stelux Holdings International Limited on the 1st April 1989. 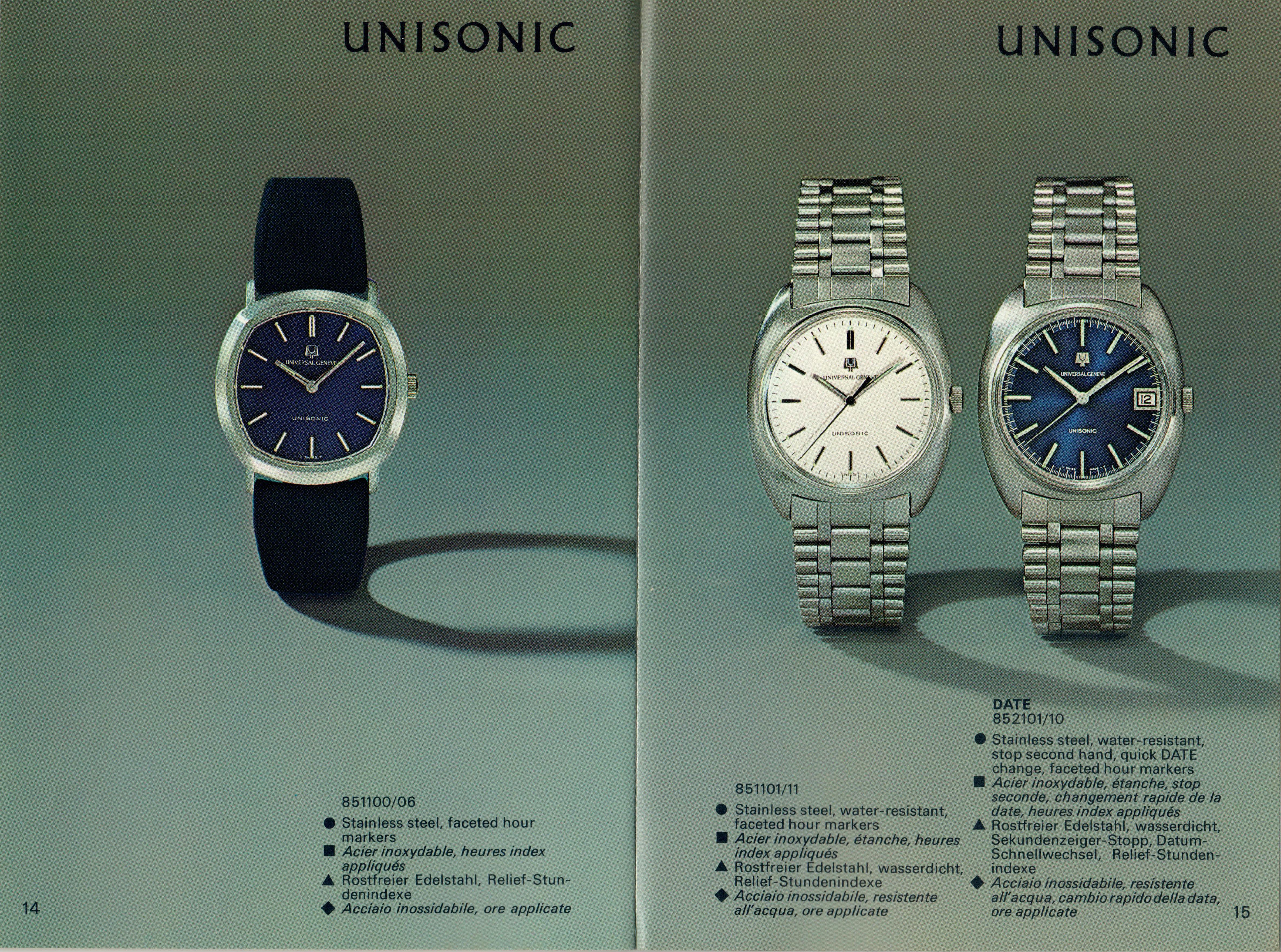 A series of Unisonic watches

In 1993 a new factory was opened in Bienne (with other brands owned by the Holdings company) with the intent to relaunch the brand for its 100 anniversary. In 1994 the ‘Golden Janus’ was released as well as a reedition of the famous ‘Compax’ line of the 1960s, featuring a Lemania 1873 calibre. The attempt was short lived, and the brand went in hibernation for another 10 years when another attempt was made to revive it with a reissue of the microtor movement. Today the brand is still active and in 2019 released a new line of watches. The brand’s glory lives on through the multitude of collectors worldwide who continue to study and shed light on the rich history this brand has to offer. 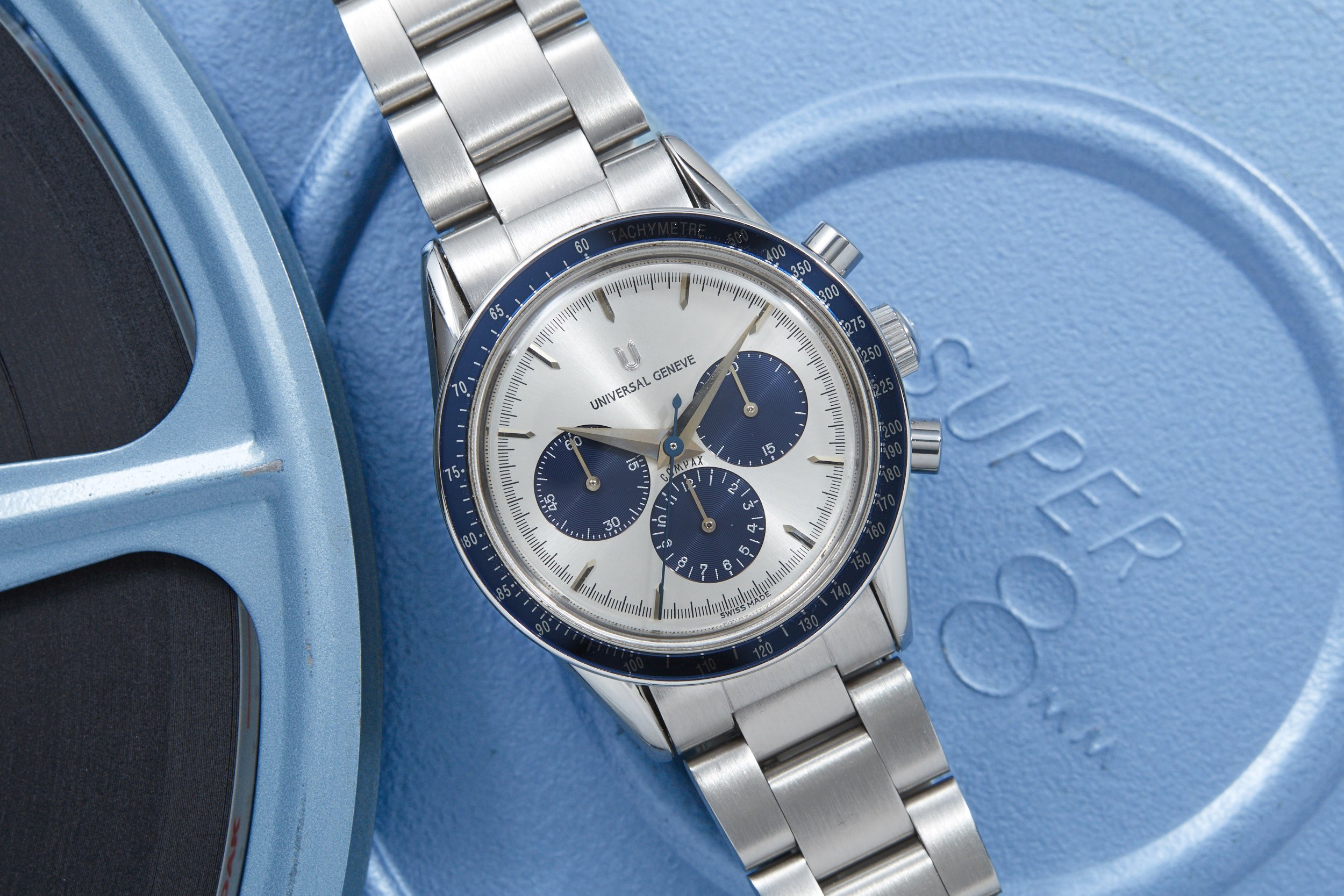